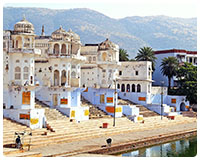 Day 01 : Delhi / Arrival
Meeting and assistance on arrival at the International airport, our representatives welcome and escort you by a private car and transfer to the hotel. Over night at Delh.

Day 03 : Delhi - Agra ( approx 204 Km 04 hours )
Early morning after breakfast check out from the hotel and drive to Agra en route visit the Sikandra to see the Tomb of Mughal Emperor Akbar. Then proceed to Agra, on arrival transfer to hotel. After relaxation visit to witness one of most beautiful among the seven wonders of the world: Taj Mahal with its speculative view. Taj Mahal, the architectural modern day wonder of the world; this monument is a fine example of the fusion of many architectural styles is one of the wonders of the modern world. Taj, endowed it with some of the loveliest buildings in the world. Tour continue with visit Agra Fort, designed and built by Akbar in 1565 A.D., built with barricaded wall of red sand stone; it houses the beautiful Pearl Mosque and numerous palaces including the Jahangir Mahal, Diwan-i-Khas, Diwan-i-Am, Macchhi Bhawan, Nagina Masjid, Meena Bazar, Moti Masjid, Sheesh Mahal, Musamman Burj where from Taj Mahal is visible in all its beauty from one side of the fort. So very ironically, Emperor Sahahjahan, prisoner of his son Aurangzeb in his old age was put in a cell from where he could gaze at the Taj Mahal at a distance, from his cell in the fort. After visit to Pearl Mosque and the Tomb of Itamad-ud-Daula built by Empress Noorjehan in memory of her father. Evening visit to local market. Overnight in Agra.

Day 04 : Agra - Jaipur ( approx 240 Km -05 Hrs )
After breakfast drive to Pink city Jaipur, en route visit Fatehpur Sikri, (37 kms from Agra), Old deserted town of Mughal Dynasty -Fatehpur Sikri built in red sandstone in honor of Saint Salim Chisti who foretold the birth of 3 sons to Emperor Akbar, is an example of robust stability combined with originality. Each important edifice here represents a type by itself. Notable among them is the Diwan-e-Khas entirely unique in its concept is a tall vaulted room with an intricately carved central pillar and capital supporting a platform that once held the emperor's throne. The airy Panch Mahal a 5 storied structure rising in pyramidal fashion was probably used by the ladies of the court. Set like a jewel in a courtyard of pink sandstone is the finest building here, the marble Tomb of Salim Chisti enclosed by finely carved, lacy marble screens. The Buland Darwaza, an imposing gateway 54 m high was built to commemorate Akbar's Aligarh the famous university town is a center of Islamic studies. Akbar built in 1492, The Tomb is combination of Muslims and Hindu Architectural styles. On arrival at Jaipur transfer to the hotel. Overnight at the hotel.

Day 05 : Jaipur Sightseeing
Today after early breakfast explore the Pink City with an excursion to Amer Fort, situated just outside the city, enjoy the experience of ride on elephant back to and from the top of the hill on which the fort is situated. Afternoon sightseeing tour of City Palace in the heart of Jaipur is known for its blend of Rajasthani and Mughal architecture. Not far away is the Central Museum. Jantar Mantar is the largest of the five observatories built by Sawai Jai Singh. The Hawa Mahal or the Palace of Winds was constructed for the royal ladies to watch the royal processions without being seen, all monuments are located in the vicinity of City Palace Complex of Jaipur. Evening visit local Market of Jaipur. Over Night at Jaipur.

Day 07 : Jaipur - Delhi ( approx 265 km 06 hours )
After breakfast check out from hotel and drive to Delhi. Upon arrival at Delhi transfer to Airport to board flight for your onwards Journey to home.