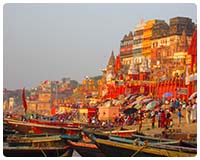 Day 01 : Delhi
DelhiOn arrival our assistance will meet you at the airport and transfer to hotel on arrival check in hotel. It is about 40 minutes drive from international airport to hotel. Rest of the day at leisure. Night in the hotel.

Day 02 : Delhi
After breakfast visiting sights of Delhi. Delhi is divided into two parts that is old and new part. In old Delhi we have red fort, Jamia mosque, Raj Ghat (the tomb of Mahatma Ghandi) and chandni chowk over night at the hotel.

Day 03 : Delhi Varanasi
After the breakfast check out from the hotel and drive to New Delhi Railway station to board train to Varanasi over night in the train.

Day 04 : Varanasi Arrival
On arrival train on Railway station our assistance will meet you and transfer you to the hotel after refreshment you will visit sights of Varanasi later in the evening you will have boat ride around the ganges over night at the hotel.

Day 05 : Varanasi
Varanasi Before the breakfast you will have boat ride around the ghats later back to the hotel for the breakfast and day at leisure over night at the hotel.

Day 06 : Varanasi Delhi Or Other Palace
Day at leisure later in the evening you will be transfer to train station to board train to delhi or other palace over night at the train